My interest in studying the mitochondrion was ignited by a course I completed 3 years ago.[13] As a naturopathic physician and researcher in generative medicine and amateur cosmologist, my explorations in electric universe cosmology have taken me to a deeper appreciation of the electricity of life and its role in methylation and detoxification. Fascinated by the body’s stress and repair response, I wondered about the cytochromes and enzymes of the electron transport chain. Since reviewing the literature on mechanisms of the cell danger response I woke this morning to a new revelation.

The mitochondrial membrane not only acts a a conveyer of accelerated electrons through the electron transport chain to produce ATP.  This double layered lipid membrane laced with specialised cytochrome proteins with the outer layer, MOMP, serving as a membrane potential platforming cell signalling post translational regulation. Pattern recognition receptors respond to proteins released from cellular or mitochondrial damage and pro-inflammatory cytokines by segmentally reducing the electrical potential.  Specific regions of the  inner membrane responds to corresponding reduction in MOMP and hydrolyzes cardiolipin, a major lipid component involved in mitochondrial fission. Mitochondrial membrane fission is a process that is used to segment and remove damaged fragments of the membrane and dispersing mitochondrial in the cytosol during ATP synthesis.[12]

MOMP responds to oxygen levels and sulfide oxidation, fluctuating NADH and NADPH redox reactions in order to govern its own folate metabolism and redox as well as influencing cytosolic conditions to initiate nuclear DNA methylation. By altering the NADH/NAD+ and NADPH/NADP ratios mitochondria direct the alternation of cell differentiation activities of DNA methylation and cell cycle arrest to the undifferentiating, demethylating cell cycle activation and the initiation of nucleotide synthesis.[3]

Changes in proton and electron flux along the membrane generate NADH and NAD+. NADPH and NAD+ concentrations are used for two opposing functions:

Here is a schematic demonstrating the intricacies of mitochondrial interaction with the cytosol involving the glycine-serine shuttle to orchestrate synthesis and repair utilizing oxidative states, with NADH/NAD+ control: 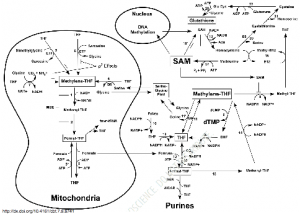 The resulting shifts in oxidation-reduction potential triggers the switch in organelle fission which occurs, in the vegetative state, to fusion morphology involved in Gº to S phases in the cell cycle and during oxidative stress. The cytokine-reactive-oxygen-species-response drives innate immunity[1,12].  The intensity of generation of ROS in the intermediate membrane space initiates cytochrome c release followed by upregulating Bcl2 to increase release of caspase-3 and caspase-9 into the cytoplasm. Caspase is the master executioner induces apoptotic autophagy (noted by accumulation of vacuoles, ATP depletion, chromatin condensation, fragmentation and internucleosomal DNA cleavage, fragmentation of the plasma membrane,6) using caspase-3, 8 and 9 for cell death (swelling of organelles including mitochondrion itself and cell membrane rupture) and using caspase-8 and cardiolipin for removing collateral damage by toxins and microbes.[3,12,13]

Redox reactions are are governed by changes in pH and temperature but the notation is confusing and difficult to track the reduction and oxidation reactions. Reduction is the gain of electrons or a decrease in oxidation state by a molecule, atom, or ion and designated by subtraction of a plus charge. Oxidation is the opposite. It is important to know this because molecular redox agents work strategically within the methionine, folic acid, and urea cycles and the transsulfation, sulfonation and detoxification pathways as well as the cell cycle, and protein synthesis.

The gasosensor, heme protein between the C-regulatory terminal and the N-catalytic terminal is present in the Fe2+/Fe3+ functions to reduce or deactivate CBS enzyme in the presence of CO or NO. Fe2+ displaces the cysteine on the cysteine ligand on the catalytic arm of CBS when it binds with CO (to form Fe-CO) leading to a 40 – 90 % CBS inhibition with no disruption of PLP binding.[2]

The nature of metabolic networks is that they are dynamically interactive within the opened-system dynamics of life.  Enzyme kinetics run the elaborate interplay of methylation, transsulfuration, sulfonation, sumoylation and glucuronidation involved in the metabolic networks, but the oxidation and reduction-producing activity, exchanging protons and electrons, are responsible for these organised processes.

During housekeeping functions, cells manage noxious stimuli by ramping up free radical oxygen species and hydrogen sulfide in response to microbial antigens. The reciprocal redox relationship  concentrates the oxidizing effect which halts free radical clean up by suppression of CYP and Glutathione formation.3 At the same time ROS inhibit any toxin-inducing DNA damage by shutting down the cell cycle, until detoxification and elimination can resume. If this is an acute and limited response, microbial debris and free radical heavy metals are neutralised and  eliminated via detoxification pathways and transporters in a negative feedback loop. [4]

Prolonged oxidative states are not well tolerated by cell membranes and succumb to lipid peroxidation resulting in impaired neurological development and neurotransmitters. The chronicity of cellular damage eventually involves more DNA and electron transport chain damage than can be repaired. Eventually mitochondrial turnover is impaired resulting in age-related chronic diseases.[10]

Minor nucleotide variation in genetic code altering gene expression have made for successful survival debuts when they were adaptive to the varying environmental conditions like starvation and pestilence, most often reducing enzyme efficiency. The popular SNPs come to mind in FTO, MAO, COMT, SHMT2, MTHFR, MTR, MTRR, BHMT, AHCY, NOS1,2,3, (nNOS, iNOS eNOS) GAD1, CBS and its subunits, CAT, CSAD, CDO, GSS, GSR, GST, SUOX, SULT1,2,3 MAT1A, DNMT3, PNMT, that have been established to be associated with modern life disorders. Some not so common ones related with sulfur dysfunction are SLC13A1 the sulfate transporter and SLC3A1, the sulfate/oxalate transporter.

Enzymes are generally substrate dependent some with very low Km values requiring low concentrations and some with high Km values like CBS to modulate complete degradation of homocysteine. However, enzyme function is regulated by protein and vitamin or mineral binding in different ways.

Enzyme activation is the product of an allosteric protein binding to its regulatory and a cofactor or coenzyme.

A non-enzymatic metal ions or organic coenzymes, derivatives of vitamins, soluble in water by phosphorylation, activates the catalytic domain, (and pyridoxal 5’ pyrophosphate activating the catalytic terminal of CBS).[2] What also modulates H2S formation is high concentrations of H2S itself, will down regulate GCLC, (but not CBS), and also down regulate inducible nitric oxide synthase NOS, and cyclooxyrgenase COX,[14].

Dysregulation of GSH synthesis by polymorphisms of GCLC and GCLM is increasingly being recognized as contributing to the pathogenesis of many pathological conditions. These include diabetes mellitus, pulmonary fibrosis, cholestatic liver injury, endotoxemia and drug-resistant tumor cells. Manipulation of the GSH synthetic capacity is an important target in the treatment of many of these disorders.[7] Small protein molecules, vitamins and minerals have therapeutic implications. Considering the role of oxidation conserving ATP demand for protection and attack and oxidative shielding cell generation to noxious substances, it is wise to know when, where and how much to intervene with vitamins, minerals and antioxidants.

One thought on “Cell Danger Response”