Methyl trapping is a situation in which folate becomes trapped and unusable by the body. It is defined as a functional folate deficiency that alters homocysteine metabolism such that folate–dependent resynthesis of methionine is compromised.

Methyl trapping was originally described in Downs Syndrome (trisomy 21) where plasma levels of homocysteine, methionine, S-adenosylhomocysteine and S-adenosylmethionine were all significantly decreased, suggesting a depression in cellular methylation capacity.  Elevated transsulfation activity with depletion of glutathione was also observed in Downs Syndrome due to the presence of an additional CBS allele, and up-regulated chromosome 21 SOD SNPs causing oxidative stress.(1)

The term methyl trapping is now applied to the cascade of symptoms of neuroexcitation following supplementation with folate,  or B12 or SAMe as a first line treatment for MTHFR SNPs. The unassuming consumer who takes supplements with methylating B vitamins may experience varying degrees of neurotoxic symptoms manifested as apparently unprovoked insomnia, rage, anxiety, brain fog and alcohol intolerance (induced sulfite and aldehyde toxicity), often after experiencing a brief period of improvement from low energy and cognitive impairment. 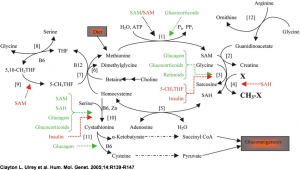 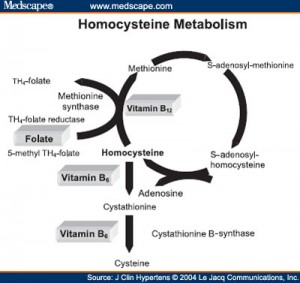 methyl compounds often complicating histamine degradation. A build up of homocysteine is the consequence, often worsened by a bottleneck at CBS (cystathionine beta synthase) due to down-regulating SNPs in the homocysteine clearing transsulfation pathway.

Neuroexcitatory and depression symptoms ensue from the complication of BH2-BH4 pathway reversal, resulting in incomplete ammonia-clearing by the urea cycle and reduced neurotransmitter formation.

Methyl trapping at a glance: